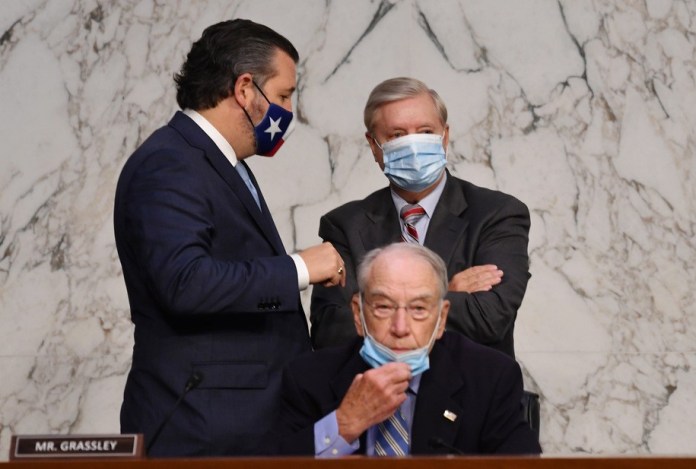 Maybe Chuck Grassley forgot that the mask he wears incorrectly while pretending he’s a respectable senator doesn’t actually protect him from COVID-19?The Associated Press is reporting that 87-year-old Republican Sen. Chuck Grassley of Iowa is in quarantine after being exposed to the COVID-19 virus. “I’m feeling well and not currently experiencing any symptoms, but it’s important we all follow public health guidelines to keep each other healthy,” he said. How Grassley was exposed remains a mystery, but considering that he and his fellow Republican political leaders have been promoting confusion and boosting bad public health policies, it isn’t surprising. Republican Sen. Rick Scott of Florida went into quarantine a couple of days ago after he says he came into contact with someone who tested positive for COVID-19. Are these two things connected? It’s hard to say, as the Republican Party seems to be the single largest superspreader of death and disease that the world has ever seen.This announcement comes just hours after Democratic Sen. Sherrod Brown of Ohio got into a confrontation with Republican Sen. Dan Sullivan of Alaska over Sullivan’s refusal to wear a mask while presiding over the Senate. The earth’s least popular human being, Sen. Ted Cruz, called Sen. Brown “a complete ass,” while other Republicans said Brown was just being performative. Weird: The entire White House and now Sen. Chuck Grassley all have or have been exposed to COVID-19. It’s almost like arrogant and idiotic anti-public health stances don’t work to protect one from public health issues like the coronavirus pandemic.- Advertisement – – Advertisement –